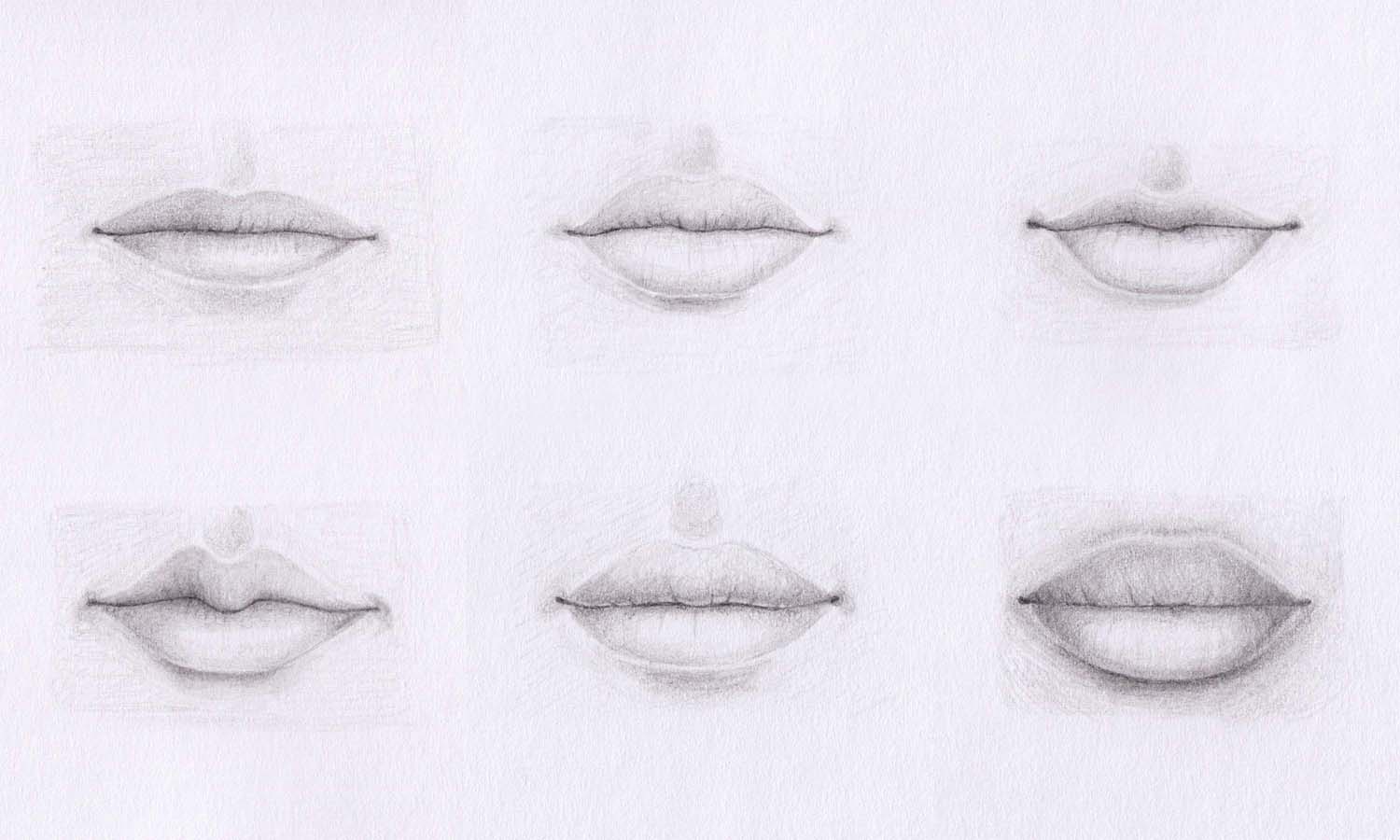 If you’re someone who loves to draw people, then you know that the lips are one of the important features to capture on paper. The way they curve and the lines that run across them can make or break a portrait. In this article, we’ll take a look at seven different shapes of lips and you will learn what to watch out for when drawing them.

Before we take a closer look at the various lip shapes, I would recommend that everyone first familiarize themselves with the basics of drawing a mouth. This will make it much easier to draw the lip shapes realistically.

How to Draw a Mouth

To draw different lip shapes, you can make use of the basic structure consisting of 3 circles from the mouth drawing tutorial.

It is important that you take a closer look at various features (ideally from a reference) and capture them in a sketch:

With plump lips, the upper and bottom lips are the same in size and volume. You can enhance this volume by drawing a shadow below the bottom lip. Depending on the amount of volume, you should draw the shadow darker or lighter.

If the lips are particularly fplump or ull, a shadow will also form above the upper lip. However, keep this one lighter compared to the one below the bottom lip, otherwise, the shadow can quickly look like a mustache.

With thin lips, the upper lip usually appears even thinner than the bottom lip. However, the center of the upper lip still does have some volume, but the sides towards the corners of the mouth run very close along the edge of the lip.

In addition, there is a tilt to the upper lip, which creates a slight shadow across it. So when drawing thin lips, always draw the entire upper lip of thin lips slightly darker than the bottom lip.

The bottom lip is in good balance with the upper lip and is also not particularly voluminous and round. After a slight rounding in the middle, you should draw the sides towards the corners of the mouth straight.

For the bottom lip, on the other hand, add shadows that fade out softly, giving the lip a gentle curve.

With this lip shape, the difference is usually not quite as serious as with the heavy bottom lip. There can be several reasons for a heavy upper lip and it can actually be beneficial to know these reasons when drawing.

If the upper front teeth are protruding and cause the upper lip to protrude, add slightly darker shadows to the top of the bottom lip. This is because the protruding upper lip casts a shadow down on it.

If the volume difference is not caused by the teeth and is natural, the bottom edge of the upper lip should be shaded more to show its volume. Here, we can start drawing darker shadows at about halfway up and weaken them as they reach the top third of the lip.

With this lip shape, the corners of the mouth are not drawn down. Rather, the shape of the upper and bottom lip visually creates a downward curved appearance.

The upper lip is wider compared to the bottom lip, which creates a small imbalance. However, we should not draw this imbalance too exaggeratedly, otherwise, the lips can quickly look unrealistic. A small difference in widths is already enough to represent this lip shape in a drawing.

While it’s not always the case, a sharp cupid’s bow can also have an arch appear in the central lip line. In this case, the center of the upper lip is rounded, which is why we should draw shadows around this area that are very similar to the shading of a sphere.

The lips of the example drawing could also be described as heart-shaped lips because the sides of the lip contour are slightly curved inward. A pointed cupid’s bow can appear on a variety of lip shapes.

With this lip shape, the cupid’s bow is only slightly defined. However, when drawing the upper lip outline, do not just draw a round arch as you would for the bottom lip, because slightly defined does not mean non-existent.

To draw the slightly defined cupid’s bow, draw the bow just a bit lower than the two neighboring arches. Let it blend just as smoothly into the rest of the upper lip.

How to Draw a Mouth